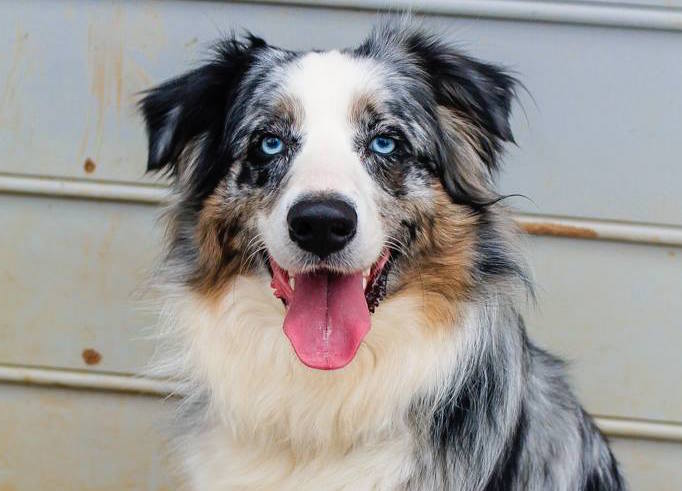 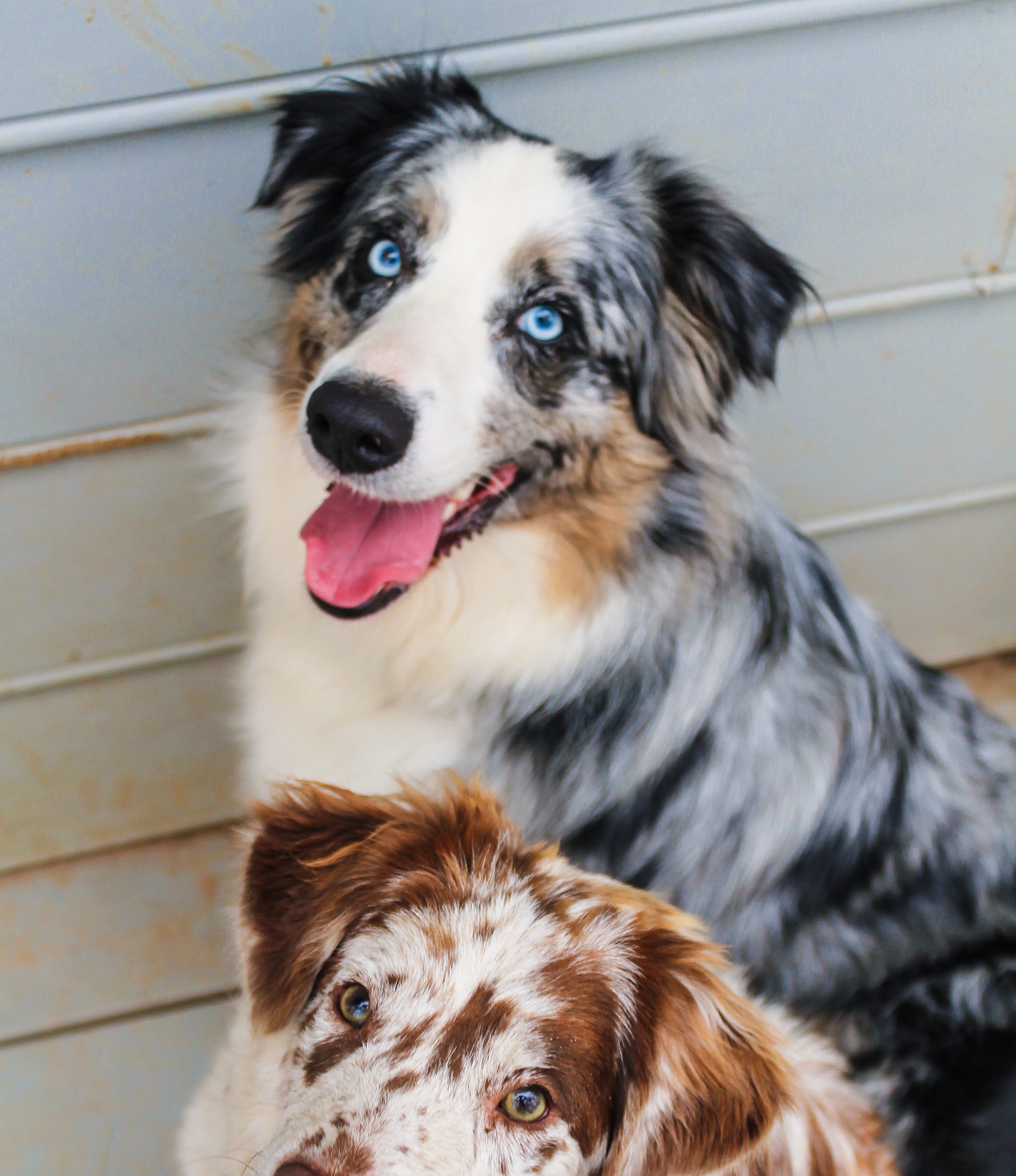 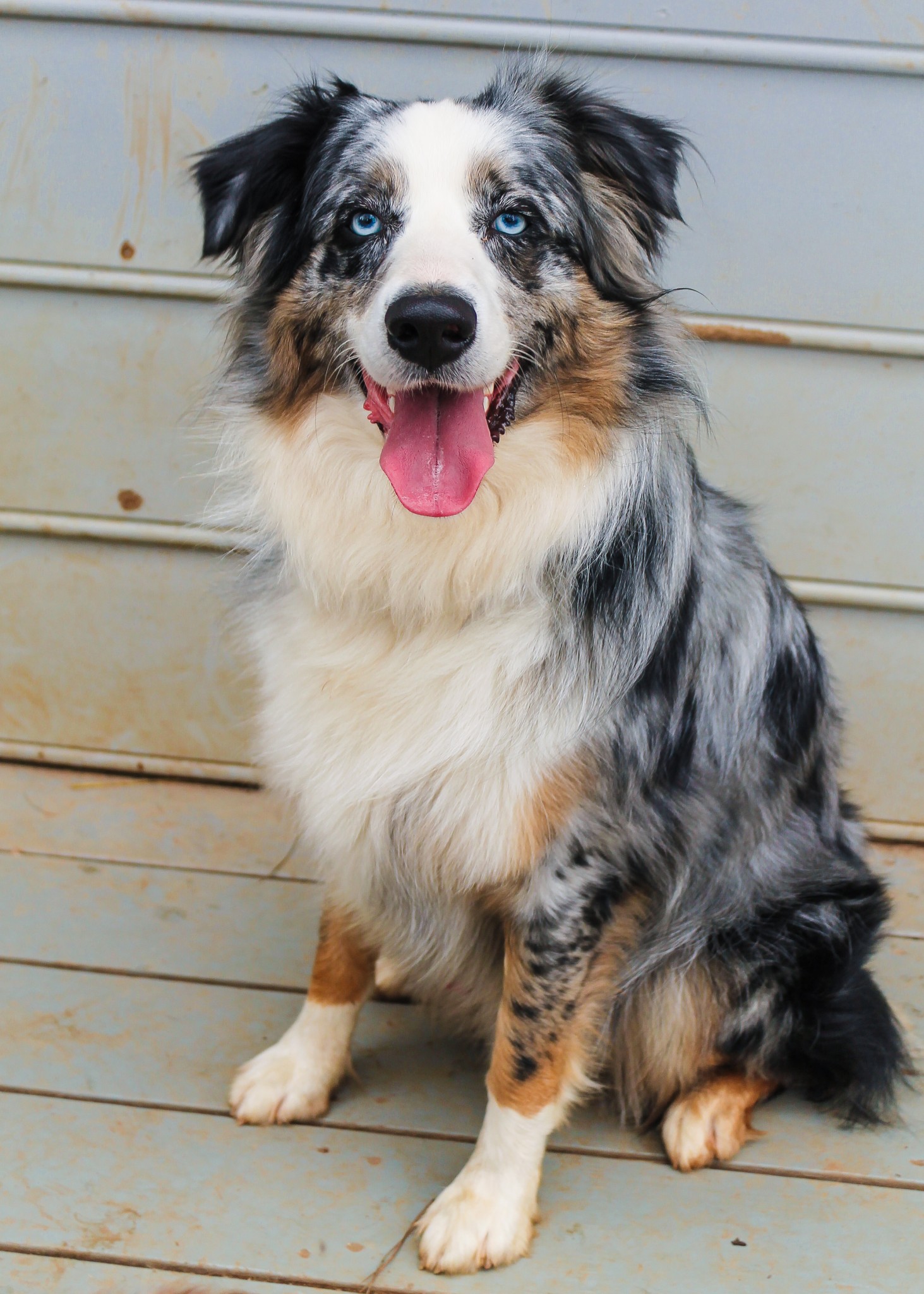 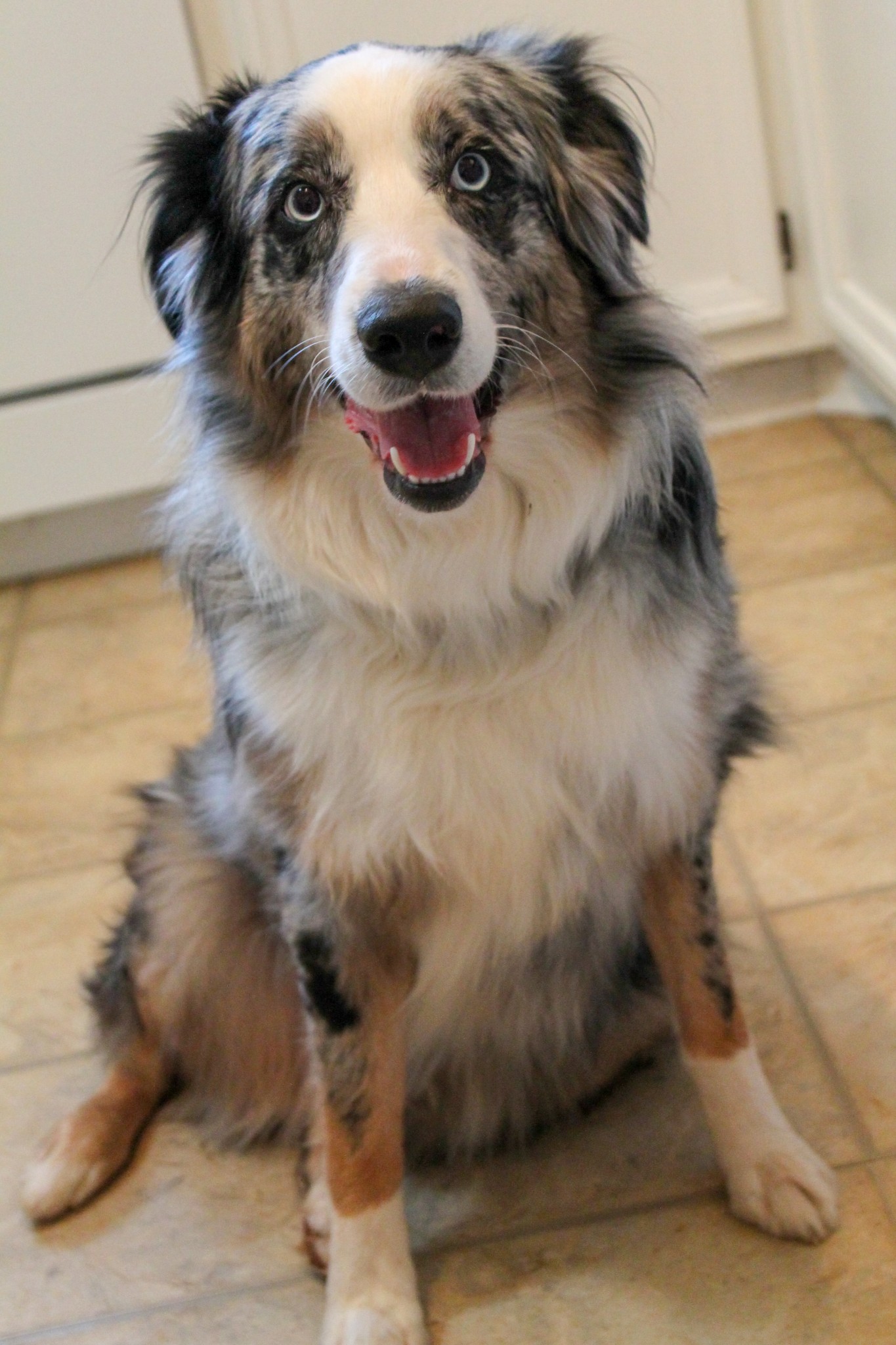 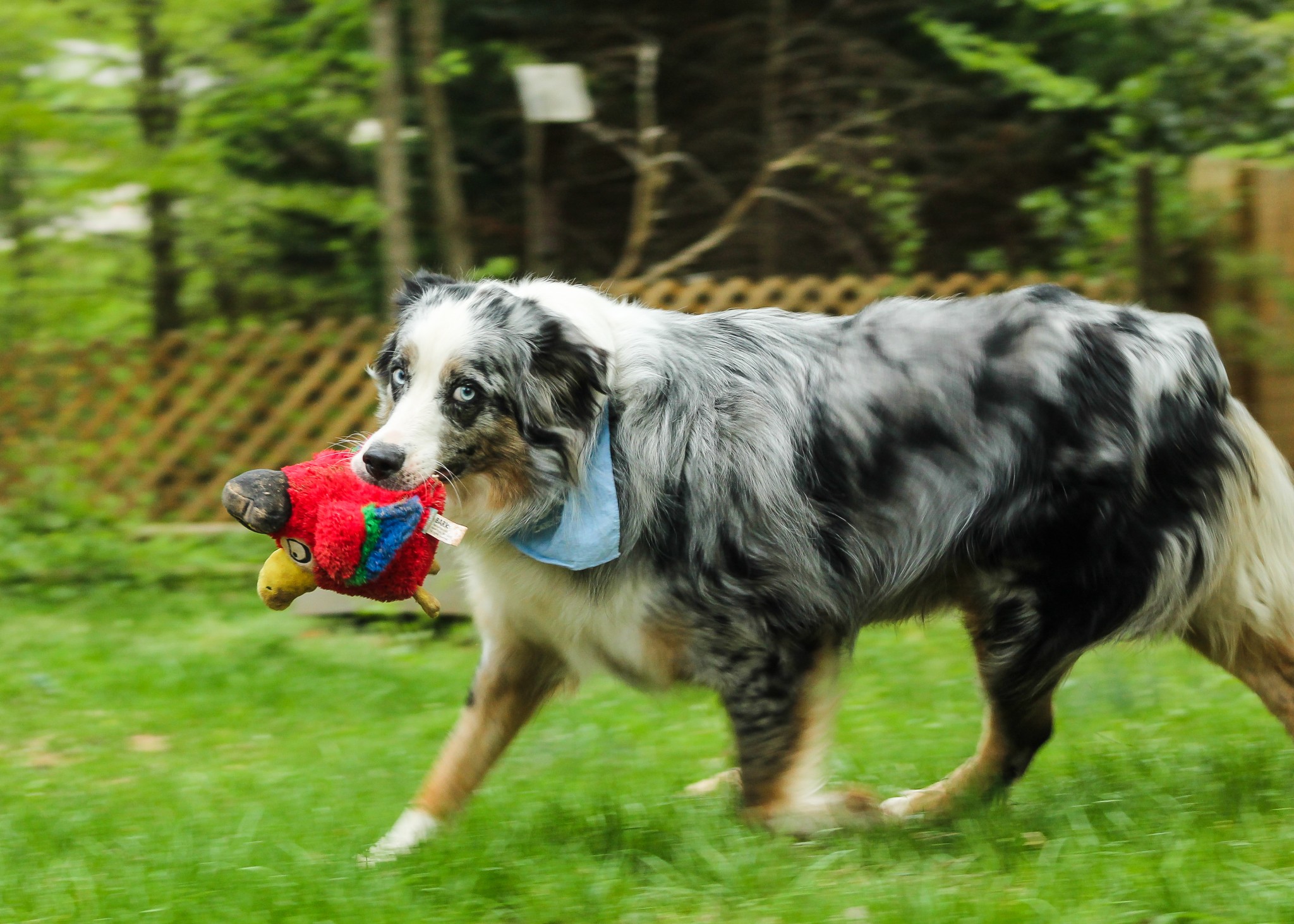 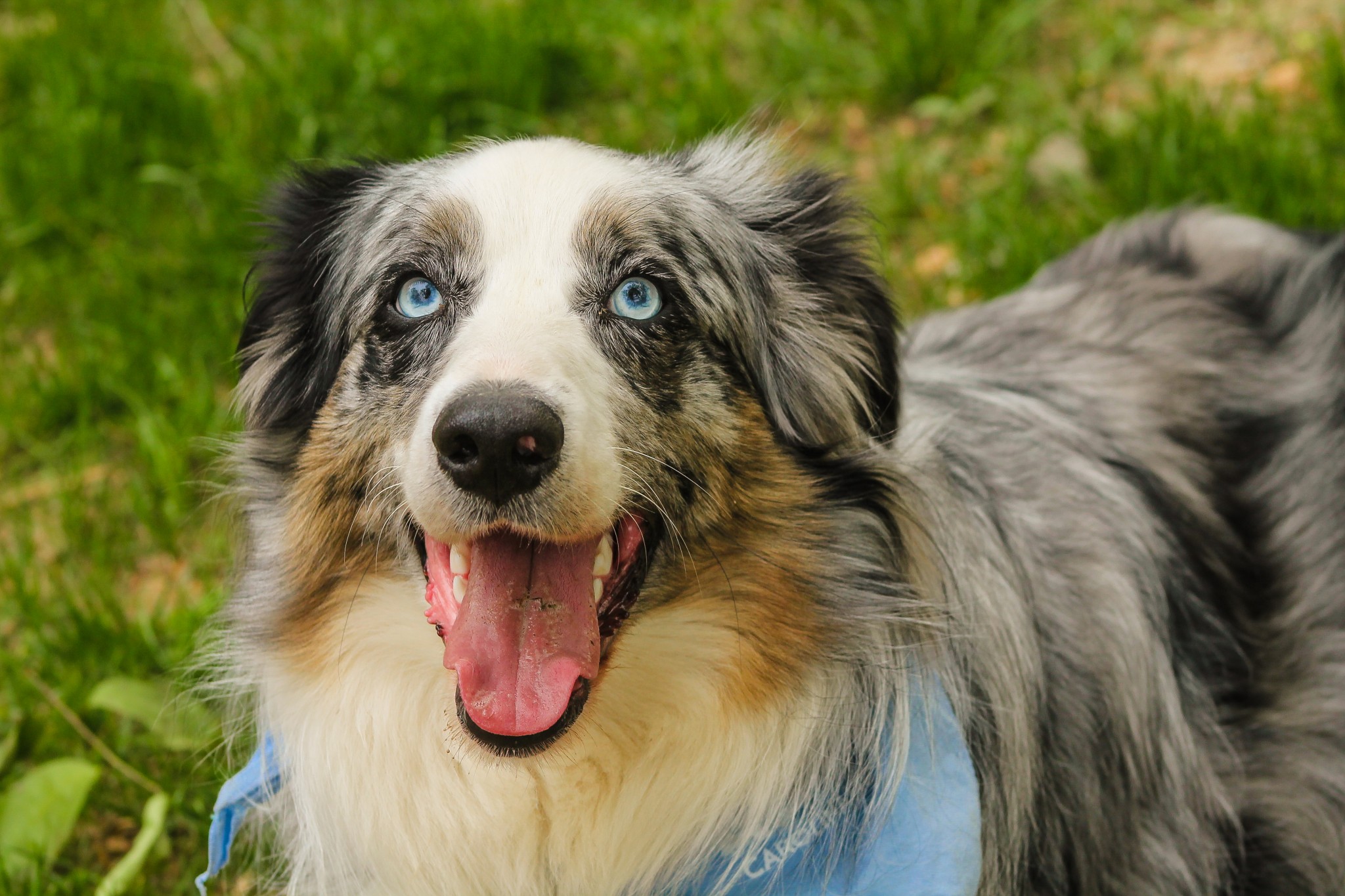 Formally introducing: Colonel “Rhodey” Rhodes, a.k.a. War Machine! Rhodey is a 1.5 year old blue merle Australian Shepherd, who came to CHAR in January 2018 after finding himself in a really bad situation. Rhodey was left at a county shelter in NC, because his owner couldn’t keep up with his training and exercise requirements. Unfortunately, Rhodey was already a bit of an anxious boy, and the added stress and confusion of being dumped escalated his anxiety to a point that nearly landed him on “the list.” Rhodey was lucky, though, because his foster mom met and evaluated him, and she decided that even though his shelter behavior was less than stellar he deserved a chance to blossom with a handler who understands Aussies.

Rhodes is a big boy – when he came to foster, he weighed nearly 65 pounds, and was at least 10 pounds overweight. Of course, he went on a diet and started a consistent exercise routine, and in the past month he’s lost over four pounds. He’s still got a few to lose, but we expect his healthy, fit weight to be around 50-55 pounds (depending on muscle). We are very aware that Rhodey is incredibly handsome, and that those baby blues can suck in even the most cautious of adopters, so we want to be very clear about what sort of home Rhodey requires.

For starters, Rhodey has some stranger-danger issues. He was not properly socialized as a young dog, and when he gets anxious he can get mouthy and has nipped at legs before. According to information we’ve gathered after pulling him, he would struggle with allowing strangers to visit his owner’s home, and vet visits were particularly stressful for him. He also becomes uncomfortable when strangers make direct eye contact and move toward him in what he feels is a “threatening” manner.

This all being said, Rhodey has made great strides in foster care, and has been going to the vet on a weekly basis for training (and weigh-ins). When he first began his visits, he would growl and shy away from the vet staff, but now he wiggles his nub and willingly accepts treats, and allows staff to take him away for weight checks without his foster mom. He’s also spent some time at the local boarding/daycare facility, and the staff has come to know and love him. Recently, he even went on a walk in a very public area with lots of strangers, children, bike rides, etc. and handled himself fantastically.

While Rhodey has certainly made progress in foster care, his behavior modification journey is far from over, and any potential adopter must be aware of this and remain committed to his training and socialization. He cannot be rushed into situations with people he does not know. He’s also not an appropriate dog to share a home with children or cats – his herding drive is strong, and when small things move quickly, he chases.

Fortunately, Rhodey LOVES other dogs, and has been very gentle and submissive with all his foster siblings. He has excellent dog manners, and his foster mom says he displays some of the best dog-to-dog body language she’s ever seen. He’s become the “puppy sitter” of the house, and contentedly shares his space with puppies for hours. Rhodey is also crate trained, house trained, walks beautifully on leash, rides great in a car, and knows basic commands.

We are in no hurry to place Rhodey, and will only consider adopters that meet all of Rhodey’s needs. Rhodey is neutered, heartworm negative, up to date on vaccines, and microchipped. He is fostered in Durham, NC, and his adoption fee is $300.

Fill out an application for RHODEY
See Our Available Dogs